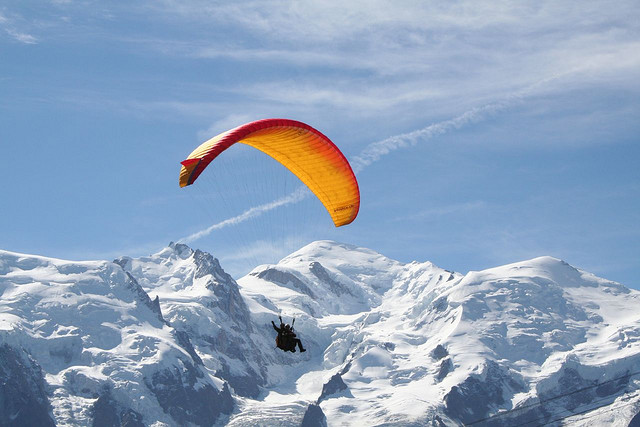 Rather than enjoying 5 hours ski-downhill in Vallée Blanche, you can fly over it in just 1 hour!
From Chamonix to Aiguille di Midi (3842 m), then a few steps along the ridge secured to guide-pilot, and finally a wonderful flight over the Vallée Blanche.

The preparation for the flight only lasts a few minutes. After a briefing to explain the necessary instruction and procedures, the passenger wears harness and helmet, then the pilot fastens both his own harness, as well as the passenger, to the wing canopy. Now you're ready for takeoff.

Getting started only requires a few running steps, so that some meters are enough to start paragliding, and the passenger almost doesn't realize being already suspended in the air. The first seconds of flight are incredibly exciting, giving the perception of weightlessness.

Included: flight in tandem, ski-pass, transfer from Aosta/Courmayeur to Chamonix.